Rich and creamy Country Ham and Potato Bake is pure southern comfort food. Delicious chunks of ham, bathed in a rich cream sauce under a melted layer of cheese is great for brunch or dinner, and this recipe can be made ahead!

For a lot of people, one of the best things about making a huge smoked ham are the slew of leftovers.  That is not a word that gets used often in this house! That salty, smoky goodness is something that the guys and I could eat everyday.

When there are those rare leftovers, I divide them into two plastic storage bags…one that the guys can pick on and one that I hide in the veggie bin to use for a couple more meals. Yes, I admit it, I have to hide leftover meat in my house. Sad, but true!

This site may contain affiliate links to products. We may receive a commission for purchases made through these links, which helps to keep this content free.

HOW TO MAKE COUNTRY HAM AND POTATO BAKE

This recipe is great for using up that leftover ham, or any cooked ham. With tons of gooey cheese and ham, this dish is at the top of the list for all-time favorites.

To get started, preheat your oven to 350 F and grease or spray an 8 x 8 baking dish.

Get all of your ingredients ready before you start cooking or mixing.  Grab your leftover ham (while you can) , or any pre-cooked ham and cut the ham into bite-size chunks. (For this recipe, I used leftovers from a pre-cooked, spiral sliced smoked Ham). Then wash the potatoes and slice them thin. Dice the onions, and measure out the butter,  milk, cheese, garlic and spices. Now you are ready to begin making this deliciousness that will have everyone saying OMG when they taste it (and licking their plates…just kidding).

In a large skillet, melt the butter over medium-high heat. Then add the onions and stir them around for about 3 minutes, until you can just see thru them. Then stir in the flour. Cook for a few more minutes.  Now, throw in all those wonderful spices you measured out, the cayenne, mustard powder, salt, pepper and the garlic and stir to mix them up.  This should be smelling pretty awesome now.  Now, douse the whole thing by whisking in the milk. Don’t worry, the delicious spice smells will be back real soon!

After cooking for 3-4 minutes, the mixture will start to thicken up. When you can swipe the back of your stirring spoon with your finger (not your tongue) and you can see it, the sauce is done. Remove the skillet from the heat.

Now it’s time to put it all together.  Using 1/3 of the ham, spread a layer of ham on the bottom of the baking dish. Then top with a layer of slightly overlapping potatoes. Then spread the potatoes with  about 2/3 cup of the sauce. Layer, overlap and spread 2 more times, so you end up with 3 sets of layers, ending with the sauce on top!

Slather that sauce on, making sure that you scrape every drop from the skillet. I use a spatula (more utensils to lick) and don’t worry about being messy, the cheese will cover it all up.

Top everything with the shredded cheese, making sure to get all the way to the sides.  I went with a lot, and I mean A LOT,  of cheese for this recipe to get a nice crunchy crust and a layer of gooey cheese underneath. You can use less if you like. (Party Pooper!) Cover the pan with foil and pop in the oven for 1 hour, until the potatoes are tender.

After 1 hour, remove the foil, switch the oven to broil and broil for 3-4 minutes until bubbly and browning on top. Remove from the oven and allow to cool slightly before serving. Garnish right when it comes out of the broiler so the parsley sticks to the cheese! Oh, the humanity!

WHAT IS A CITY HAM AND COUNTRY HAM?

In spite of the recipe title, the ham used in this recipe is not a Country Ham. It is a City Ham. So you might ask..what’s the difference?

Most grocery stores carry City Ham and that’s what I used here. City Ham is the most popular kind of ham sold in the United States. They are wet-cured, which means that they’ve been soaked in or injected with brine to cure it. The brine is usually made salt, sugar, seasonings and some kind of curing agent, like nitrates or nitrites.

A Country Ham is uncooked ham that is dry-cured with salt and spices, usually smoked , then left to hang and age from a few months to several years. The meat is extremely salty, which is part why people love it.

Dig in and have a piece. Just take a good look at those juices…this is why it is a favorite!

This recipe was adapted from Scalloped Potatoes and Country Ham  by Damaris Phillips on Food Network. If you love leftover ham recipes, you might also like these amazing Ham Cakes with Garlic Aioli. 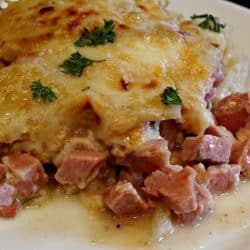 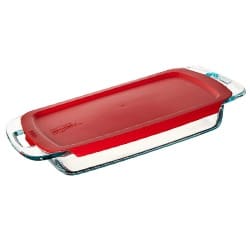 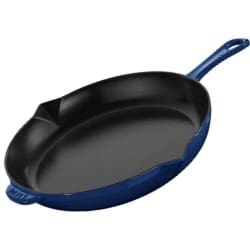 1. 2% milk was used for this recipe.
2. Your favorite melting cheese like Swiss or Gruyere can be substituted for the Monterey Jack.
3. For less heat, reduce the cayenne pepper to 1/4 teaspoon 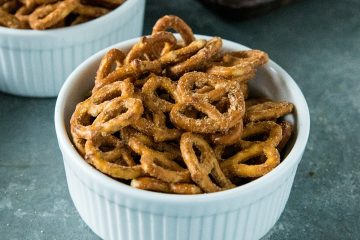