So easy and delicious, caramelized Brown Sugar Rum Baked Ham, with crispy brown edges and sticky glaze, will be the centerpiece of your Sunday or holiday dinner table. Great for parties and potlucks too!

Are you thinking about making a baked ham and feeling intimidated? Worried that your ham will be like so many others you’ve tasted – dried out and tasteless? Rest easy folks, there is no need stress with the tips and tricks you will find here.  You will make the most delicious, juicy ham your family and friends have ever tasted and they will become your raving fans!

Honestly, I have made my share of dry ham, especially the kind that are spiral cut. Now that I have finally nailed it, I am ready to share my tips with you.

WHAT IS THE BEST HAM TO BUY?

For best results, go for a fully cooked bone-in ham. Most grocery stores carry City Ham and that’s what I used here. City Ham is the most popular kind of ham sold in the United States. They are wet-cured, which means that they’ve been soaked in or injected with brine to cure it. The brine is usually made salt, sugar, seasonings and some kind of curing agent, like nitrates or nitrites.

It might look fancy, but making this ham is as easy as making a few cuts and mixing up the glaze. You will need a large roasting pan with a rack for the best results. No rack on hand, then make one by rolling up 3 12-inch sheets of foil tightly, then place them in the bottom of your pan. Ham should rest on all three rolled up pieces to create a rack.

This is how I make it:

WHAT TO DO WITH LEFTOVER HAM?

Leftover ham can be frozen, stored in the fridge to use later (ham and eggs anyone?) or star in new recipes. Here are a few ideas for using your leftover ham: 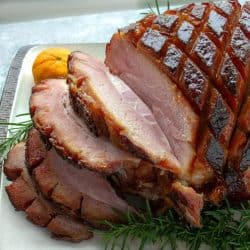