This classic French Onion Soup recipe is made with perfectly caramelized onions, toasted french bread and two kinds of melted cheese on top!

There is nothing better on a crisp, cold day than a bowl of rich French Onion Soup. This recipe is for traditional french onion soup – the kind that has the crunchy bread and gooey cheese melted on top. It’s not exactly healthy, but definitely worth the spurge.

The secret to the best soup french onion is in the caramelized onions. The onions are what makes this soup! And it’s the best way to pull all of the rich flavor out such a humble ingredient.

Secondly, the flavor of the broth or stock will make or break this soup. There is a lot of variety when it comes to the flavor of broths. Choose one you like and even enhance the flavor by adding a few bouillon cubes or a teaspoon or two of Better Than Bouillon. I use this to make my own beef broth rather than keeping boxes of broth on the shelf.

Caramelizing the onions is an easy process, but will take a little time. If you’re using a mix of onions, including white or yellow, plan on an extra 10 minutes for the onions to fully brown. For red onions, allow about 30 minutes of cooking time. The onions need to be stirred every 3 to 5 minutes so you’ll need to plan on staying in the kitchen while the onions are cooking.

How many calories in french onion soup?

Can french onion soup be frozen?

Yes, it can. Let soup cool to room temperature. Transfer to freezer-safe containers, leaving at least 1 to 2 inches of space at the top for expansion. Freeze for up to 3 months. Thaw overnight in the refrigerator before re-heating. 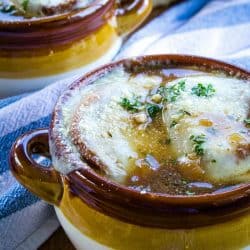 The flavor of this soup depends much on the flavor of the beef broth. Step up the flavor as needed with beef bouillon. I recommend the Better Than Bouillon for the best flavor. Taste the soup and add seasoning before topping with bread and cheese.

If you made this recipe, please leave a comment and rating. I would appreciate the chance to troubleshoot any issues you might have had before you leave the rating!